Michał Kwiatkowski nipped past a dithering lead duo 150 metres from the finish to take Omega Pharma-QuickStep’s second win of the Tour of Britain. The Pole now takes over the yellow jersey.

A large break went away early on, and for the first time Mark McNally wasn’t there. Garmin’s Lasse Hansen made it again, and the Dane was joined by Albert Timmer (Giant) and Alex Dowsett (Movistar) as well as Sebastian Lander, Peter Velits (BMC) and a handful of British Continental riders.

Their gap peaked at four minutes but IAM and OPQS took to the front to limit their advantage as they were interested in getting their leaders the win and the bonus seconds that go with it. Alex Dowsett was unfortunate to puncture at 60km to go and was forced to drop back to the peloton as a result.

After that there wasn’t much action until Hansen, Velits and Timmer attacked with 13km to go. The trio worked well together to prolong their stay out front until Timmer decided enough was enough on the final climb. Back in the peloton Jack Bauer attacked and caught the Giant rider.

It looked certain that the duo would contest the win but in the final 500 metres the pair seemed to slow. OPQS leader Kwiatkowski seemingly came out of nowhere in the final bend to sprint past Timmer and Bauer to take the win, bonus seconds and the overall lead.

I didn’t expect such a hard climb at the end. I think bauer and timmer didn’t see us before the last corner. I was sure nobody was on my wheel and I’m happy that I could finish like that after the amazing work from my team.

Its not an easy race to control. Of course we have a really strong team and we’re gonna try to win this race but there’s still a few stages to go.

Good day for
OPQS – Another stage win, and now in the GC lead

More hills tomorrow and a finish similar to the one we saw in Llandudno. The route loops inland from Exmouth and through Dartmoor National Park, with the fierce climb of Haytor featuring 62 kilometres in. That’s the last categorised climb until Stoke Hill, which comes two kilometres from the finish.

The final climb isn’t as tough as the Great Orme and the two kilometre descent into the city centre isn’t as technical as we saw on that stage – its a mostly straight run-in. I think we’ll see a similar outcome at the finish with a reduced peloton contesting the win.

After his win on similar terrain on stage 2, Mark Renshaw is one of the favourites tomorrow. The finish should suit Sky’s Ben Swift too, as long as the likes of Mark Cavendish and Marcel Kittel don’t make it over Stoke Hill at the front of the peloton. As for those two, well we’ll see how hard the pace is in the final kilometres.

Heinrich Haussler of IAM Cycling could be a factor too, although he doesn’t seem to be in great form. Yellow jersey Michał Kwiatkowski will be looking for time bonuses in order to consolidate his lead, and will be the man for OPQS is Renshaw fails. Nicola Ruffoni of Bardiani-CSF is having a great race and will be present in any sprint finish.

Moving onto puncheurs, Giovanni Visconti could try something if he wasn’t too injured in today’s crash, so too could Sylvain Chavanel given his time deficit to the yellow jersey. Whether they can stay away on the descent is another matter though. NFTO’s Adam Blythe is an outsider, and he seems to be in good enough form to put in a late attack. 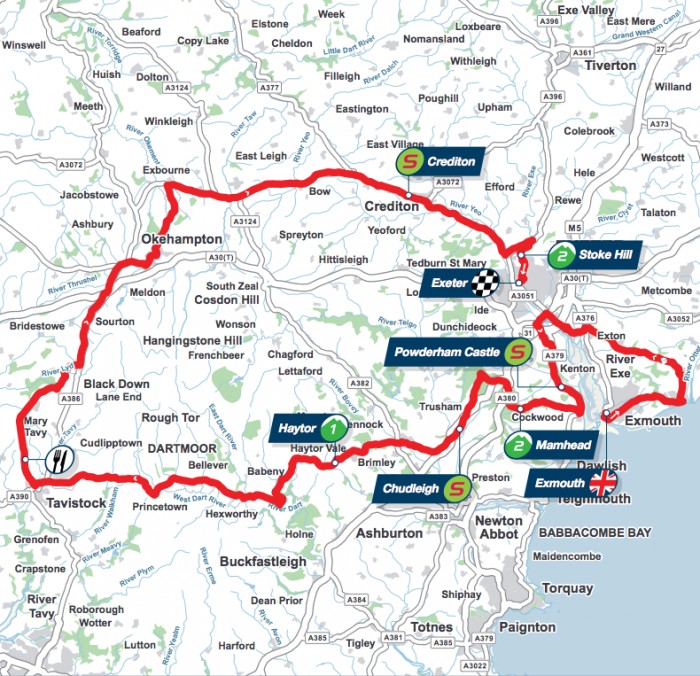